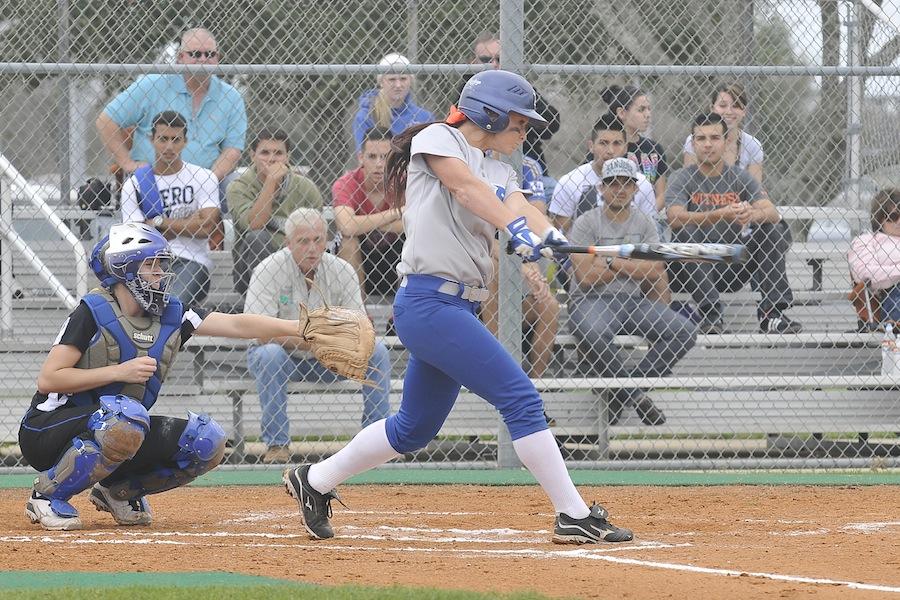 A pack of eager Coyotes scour South campus as they prepare to brawl with the other mobs. Ferocity furrows their faces with intentions of frightening and ultimately defeating their enemies. Prepared with bats, balls and helmets, this tough group of ladies is about to battle with teeth baring, and claws… I mean bats, swinging.

The fierce ladies of the San Jacinto College Softball team are beginning their Conference play, a long and tremendous fight that will determine the outcome of their 2014 season.

The team fell short in the Regional Tournament last season, leaving the girls with empty “disappointment.”

“We don’t want that feeling again, so we are working hard to reach and win the regional tournament, and our ultimate goal of a national championship,” San Jac left fielder Sarah Ragsdale said.

The team’s first conference game is where their hard work and preparation were tested. On March 7, the Coyotes took on Lamar State College – Port Arthur, kicking off conference play with home field advantage.

“I hope that we play up to our potential, and contend for a Conference and Regional title,” Head Coach Kelly Saenz said. Saenz is in her eleventh season as head coach and was recently inducted into the Manitoba Softball Hall of Fame for her high school softball achievements.

Kelsey McClain, a former San Jac Coyote, is the team’s Assistant Coach. McClain was a pitcher for the Coyotes in 2008 and 2009. During her two-year reign, she stacked up numerous honors including achieving the NFCA All-American Team and NJCAA All- Region First Team.

“Coach McClain brings tradition to our team,” Ragsdale said, “She knows what it takes to be successful at this level.”

Success is what every team wants and so far the Coyotes have shown promise of reaching that goal. Their current record is 16-5 with game leaders being Ragsdale, Jesse Rodriguez, Karri Smith and Lauren Von Boeckmann, according to the stats.

Saenz credits last inning clinches as this season’s trend. Despite blood pressure-raising, palm-sweating games, a “W” goes in the record books, and that’s all that’s needed for the Coyotes’ desired Conference title.

However, past wins are irrelevant in Conference play. The playing fields are even as every team begins a new record of 0-0. Before heading into the competition, the team needs to work on taking the season, “one game at a time and one pitch at a time,” Ragsdale said.

“We just have to stay focused at practice to make our weaknesses our strengths,” she added.

With their guards and gloves up, the pack begins their hunt ready to prey on those ill warned of the cleated Coyote attack.