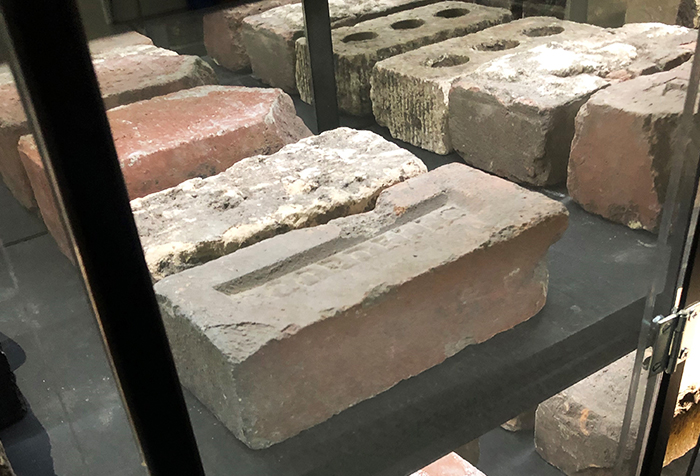 Artist Alexander Squier was inspired to create Earthly Bodies: The Houston Brick Archive while working on a cultural project in the Sharpstown area and saw old homes, once the symbol of wealth, demolished down to bricks.

Houstonians see bricks on every corner and do not give them a second thought, but visitors attending San Jacinto College Central Campus’s art exhibition, Earthly Bodies: The Houston Brick Archive, will think otherwise.

The display features the work of Alexander Squier and showcases over 300 bricks. According to the exhibition’s statement, “The bricks serve as a metaphor for change, and represents the movement of people and the diverse and dynamic nature of the world.”

Carmen Champion, Central Campus art professor and gallery curator, said Squier noticed the bricks when he was working on a cultural project in the Sharpstown area, a neighborhood that was once affluent but became one of Houston’s least desirable subdivisions. Squier saw old homes, once the symbol of wealth, demolished down to bricks.

Champion said the artist was inspired by the shifting status of the neighborhood and the relationship between the minority workers that built the houses and the wealthy homeowners.

The exhibition features several interactive stations. One is a brick rubbing station where attendees can transfer the face of a brick to a piece of paper they can take with them when they leave. Another station offers an in-depth history of the workers and their families who used the bricks to build the houses. Since viewers are not able to hold the bricks because of their fragile state, a third station lets them get an up-close look on an iPad. At the same time, two projectors show videos explaining where the bricks came from on one, and their typography on the other.

Champion said the artist noticed the manufacturers’ stamps showed the bricks were manufactured in Mexico and around the U.S. As a result, he started viewing the bricks as “bodies” related to human migration.

“So, he is talking about labor and migration that is very cohesive and a point of context for today with issues with the border and immigration,” she added.

Meanwhile, Champion said engaging with works of art like the brick exhibit, simple elements broken down from something greater, helps viewers understand the larger picture they represent while allowing them to formulate unique interpretations.

“Imagine a world where we have no art,” she said, “and we have nothing we can interact with like this, and it makes for a very dull kind of static.”

Earthly Bodies: The Houston Brick Archive is on display until March 18 when it will close with a reception from 4 p.m. until 7 p.m. in the art gallery (Room 119) of the East Classroom building (C4) on the Central Campus.