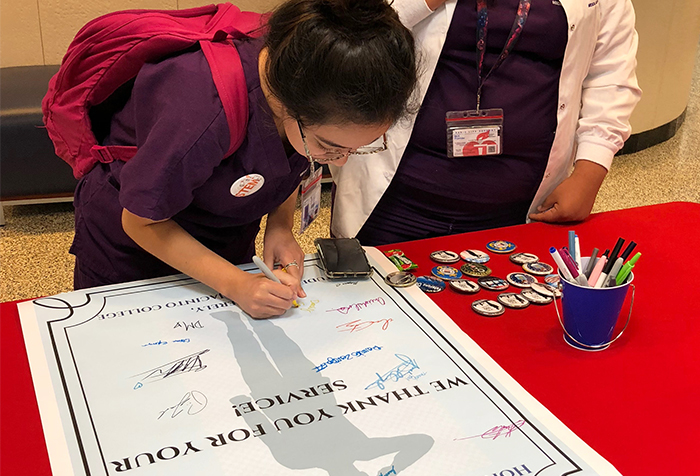 Daisy Saucedo writes a message of appreciation to the men and women who served in the United States armed forces during the Veterans Celebration Kickoff Nov. 5 on the North Campus.

Army veteran Irvin Fuller was in the military for 20 years before joining the Veterans Success Center on the San Jacinto College North Campus. Like many others, he served his country with honor and bravery, but his deployment to Iraq came at a cost to his family. Being away from his loved ones took its toll, and like Fuller, many veterans serve at the expense of their personal lives.

“A lot of us paid a serious price whether it’s being away from family, marriages failing, or whatever the case may be,” Fuller said. “It’s a lot to sacrifice for your country.”

Although now out of the military, Fuller said he still wants to serve others, so he got a job with the Veterans Center where he feels the comradery of others with similar experiences to his, and who understand the individual cost unique to military service.

“They (civilians) will not know the trials and tribulations we had to go through to preserve the freedoms that we, as Americans, hold dearly to us daily,” he added.

Therefore, in honor of Veterans Day, the office of Student Engagement and Activities (SEA) on the North Campus hosted a series of tributes honoring the service of San Jac’s veterans beginning with the Veterans Celebration Kickoff on Nov. 5. At the kickoff, students were able to show their appreciation by writing messages of gratitude on two large posters. The posters were then presented to former service members as gifts during the Veterans Recognition Ceremony on Nov 8.

North Campus SEA Specialist Jennifer Cerda said the events are meant to honor veterans while raising awareness for the struggles faced by many members of the San Jac community.

“A lot of students don’t know which staff member or fellow classmate actually served in the military,” she said. “This event is a great way for the students to connect with our veterans.”

Like the North Campus, the South, Central, and Maritime Campuses also paid tribute to their veterans with many commemorative events. The Central Campus participated in the Run to Honor Veterans on Nov. 3 and hosted the Veterans Day Faculty Panel on Nov. 8. All campuses hosted flag-raising ceremonies, while the three academic campuses participated in Canstruction, a competitive showcase featuring art structures built from canned foods.

Furthermore, South Campus’s Director of Evening, Weekend and Campus Services, Ross Kelsey, is leading the Veterans Oral History Project, an effort started by College employees in 2011 to chronicle the stories of San Jac’s veterans through filmed interviews with the intention of submitting them to the Library of Congress. In 2015, Kelsey assumed the task and 19 stories qualified for submission. He continues to canvass for interview subjects.

Meanwhile, Fuller said, events like the kickoff celebration serve as a reminder of the service and sacrifice of an often overlooked population.

“Us as veterans, we are the forgotten people,” he said.

Likewise, Melanie Neill, a coordinator who works with Fuller agreed the public does not appreciate veterans’ service as much as it should but said the tribute events go a long way in demonstrating gratitude for former members of the armed services.

“The small gestures really do mean a lot to our veterans,” she said. “If we run across a veteran, we should give a small gesture to them as appreciation. Because they had to things that we wouldn’t do or couldn’t do.”