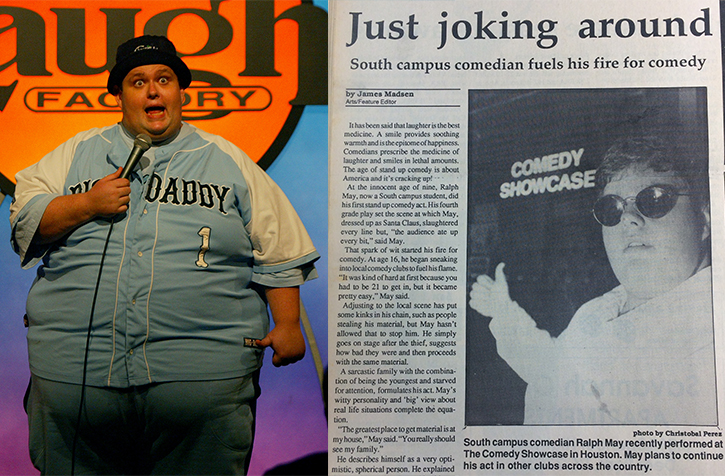 May performs at the Laugh Factory (left) in July 2003 after moving to Los Angeles to pursue his standup career. The San Jacinto Times interviewed the then-unknown comedian for an article appearing in the Times' Oct. 8, 1990 issue.

Popular standup comedian and former San Jacinto College student Ralph “Ralphie” May died unexpectedly in Las Vegas during the morning hours of Oct. 6 from cardiac arrest after battling pneumonia for several weeks. He was 45.

San Jacinto Times reporter James Madsen interviewed the comic in the fall of 1990 while May was a student on the South Campus. The comedian, who was appearing at The Comedy Showcase at the time, spoke with Madsen about the inspiration for his standup routine.

“The greatest place to get material is at my house,” May said. “You really should see my family.”

Ralph Duren May was born Feb. 17, 1972 in Chattanooga, Tenn. but was raised in Clarksville, Arkansas. At 17, he won a contest for a coveted spot to open for his idol, comedian Sam Kinison. At Kinison’s suggestion, May moved to Houston to work on his routine. He attended San Jac in the early nineties before moving to Los Angeles to further pursue his career.

May first gained recognition in 2003, after coming in second place on the first season of the television program “Last Comic Standing.” In 2005, he released “Just Correct,” the first of seven comedy albums.” He would go on to star in four specials for Comedy Central and two for Netflix while maintaining an extensive touring schedule.

Friends and colleagues of May took to Twitter as soon as news of his passing broke to offer condolences and voice their grief. Comedians Kevin Hart, Bob Saget, and Arsenio Hall all paid tribute to the late comic.

He is survived by his estranged wife Lahna Turner, whom he married on July 3, 2005.

Also surviving are: two children, son, August James and daughter, April June; his mother, Sue Ann May; two sisters, Camellia May and Melanie Adamski; a brother, Winston; his stepmother, Gayle May; a half-sister, Carrie May Ezell; and a stepbrother, Gary Gilley.

As of press time, services for May were not yet announced.

Michael Taggart contributed to this report.

An earlier version of this story reported May graduated from the High School for the Performing and Visual Arts in Houston. May’s sister, Camellia, told the San Jacinto Times the late comedian graduated high school in Arkansas.